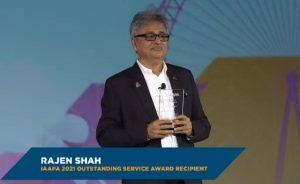 His award was announced earlier this year in September; this was the ceremony where the IAAPA officially extended it to him, with the accompanying commendations and backstory.

In the online award show relayed through a live video stream, the award presenter described Mr. Shah’s extensive accomplishments in the global attractions industry, including his part in the IAAPA itself—where he has served as a member for 16 years, and whose board of directors he currently sits on.

His candidacy for this prestigious award was based on the hard-earned fruits of his 37-year career in the water park equipment industry, the highlights of which include establishing the first attractions industry manufacturing operation in India, and being the first Indian manufacturer to export attractions products globally.

Mr. Shah, responding to his award, mentioned that he was humbled by the recognition for his work, and briefly thanked the IAAPA for being instrumental in his continued success—for helping him create a significant network of business associates and friends in the global attractions industry.

He also thanked the Indian Association of Amusement Parks and Industries (IAAPI) for bringing him to recognition with the IAAPA. Giving credit for the award to his team in Arihant Industrial Corporation, he extolled their hard work, customer-centricity, and dedication to the industry’s cause of bringing joy to people all over the world in this time of stress and worry.

Rounding off his words of gratitude, he thanked his wife, Neeta Shah; daughter, Niral Shah; and son, Darpan Shah, for encouraging him on the long journey with the company. He closed his address with an encouragement to the global attractions industry, urging them to press on in their cause of spreading happiness, bonding families, and using ingenuity to reduce the tension and depression all over the world.

The International Association of Amusement Parks and Attractions (IAAPA) represents more than 6,000 amusement and attractions industry members in more than 100 countries. Its annual IAAPA Expo in Orlando, Florida, is considered the world’s largest attractions trade show in terms of member attendance and exhibitors.